Edward Abbey: Seer in the Desert

One of the pleasures of my summer vacation, visiting  parks on the Colorado Plateau, was re-reading the 1968 classic by Edward Abbey Desert Solitaire. As always I enjoyed his lyric and intensely personal descriptions of the desert and his sketches of such characters as morose cowboys and a moon-eyed horse. But this time I was struck by something I had never noticed before, the book offers a glimpse into the future.  So what did Abbey, seer of the desert, foresee? 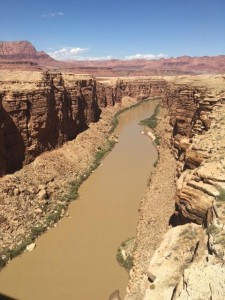 1) The looming tragedy of the Glen Canyon Dam – Alright this one was not too hard to predict. One of the book’s most enjoyable chapters is the author’s leisurely raft trip down the Colorado right before the completion of the dam that would forever drown this stretch of the river. Calling out the project as a silt trap and an evaporation tank, he bemoaned the irony of calling the lake created by the dam after the great river explorer  – John Wesley Powell. But perhaps Abbey could not have foreseen that just 50 years later there are serious proposals to open the gates of the Glen Canyon Dam and let the river run free at least through the Grand Canyon. Or perhaps he might have said – I told you so. 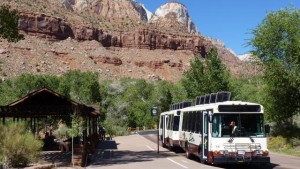 2) Reimagining our National Parks – For me Abbey’s most revelatory thoughts addressed  the desired future state for our National Parks. As a park ranger in the late 50s -60s, he was horrified by the onslaught of motorized industrial tourism and the policies of an agency he sometimes refers to as The National Parking Service. But all his writing is not negativity, he makes some very concrete recommendations.

One -No more cars in National Parks. He proposes that the service repurpose existing roads for walking, bicycles and even buses if you must. For example, he notes how this would vastly improve the visitor experience in Yosemite, which he describes as a “dusty milling confusion of motor vehicles and ponderous campers”.

Three -Put rangers to work not selling tickets or filling out forms, but leading the public  into the outdoors to enjoy the wonders of an unfamiliar carless word.

This summary does not do justice to his ideas some of which are laugh out loud funny. However, I know Abbey would be glad to see his idea of banning car put into action in places like Zion National Park and in parts of the Grand Canyon’s South Rim. As for his thoughts on new roads and ranger, well for better and for worse, budget short falls have taken care of those action items.

3) Wilderness as a Revolutionary Idea – Along with all the other good reasons to set aside public lands as wilderness, Abbey presented what he believed was an entirely new argument. He says it best “…the wilderness should be preserved for political reasons. We may need it someday not only as refuge from excessive industrialism, but also as a refuge from authoritarian government, from political oppression.”

He expands on this theme noting that few civilizations are able to hang on to personal liberty for their citizens. And he goes on to predict that places like national parks could serve as centers of insurrection. While it might be tempting to draw some parallels to current events,  See Park Rangers to the Rescue,  one prediction Abbey got wrong was who would be on the front lines. He speculated that the insurgents might be made up of self-sufficient types farmers, cowboys, and woodsmen. It has not turned out that way – the protesters in my experience are more likely to be 60 something year-old women – like the one I met  on a Roads Scholar bus trip  to the Grand Canyon wearing her Alt NPS Tee shirt. Time to work the phones, barricades can come later.