Network for Landscape Conservation: A Lesson in Nature and Culture 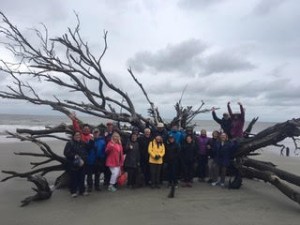 The Coordinating Committee of the Network for Landscape Conservation gathered for a picture on Boneyard Beach, Bull Island in the Cape Romaine National Wildlife Reserve in South Carolina. The field trip kicked off an April retreat in Charleston South Carolina to finalize the outcomes of the recent  National Forum for Landscape Conservation and to identify strategic initiatives to advance the conservation at a landscape scale. Collaborative, cross border conservation is an emergingtrend in North America and beyond, offering a new approach to connect and protect nature, culture, and community. The Network was formed to serve as a new organizational center for practioners and to advance expertise on conservation at a landscape scale. The low country region is a great example of a conserved natural landscape with four Federal Wildlife Refuges, designation as the Carolinian-South Atlantic Biosphere Reserve, and  ACE Basin Project that manages over 100,000 of protected lands and estuaries. However, it is the cultural heritage of the region, it is one of the centers of Gullah Geechee culture, that makes the landscape of truly global  cultural and natural significance.

The Gullah Geechee people of today are descendants of enslaved Africans from various ethnic groups of west and central Africa, who were forced to work on the plantations of coastal South Carolina, Georgia, North Carolina, and Florida. The geographic isolation from outsiders and strong sense of family and community allowed the Gullah Geechee people to maintain a separate creole language and developed distinct culture patterns, which included more of the African cultural tradition than African-American populations in other parts of the United States. After the Civil War the island plantations were for the most part abandoned. The people of the region were able to maintain language, arts, crafts, religious beliefs, folklore, rituals and food preferences that are distinctly connected to their West African roots and to the natural resources of the coastal ecosystem

Today sprawling coastal development, changing job markets, and population shifts have impacted the natural resources of the low country and those same forces have adversely impacted many Gullah Geechee people. These changes have caused a loss of their traditional economy of farming, fishing, hunting, and small-scale marketing of subsistence products, most famously sweet grass baskets. In many cases real-estate development has led to loss of lands that had been in families for generations.  First came the northern owned hunting clubs and estates, later military bases, and then resort and second home development. This encroachment by outsiders has resulted in out-migration, economic hardship, and loss of Gullah Geechee culture.

At the April meeting the members of the Coordinating Committee were privileged to hear from two women who are working to preserve the culture of the Gullah Geechee people that is so deeply rooted in the low country region. Heather L. Hodges, the recently appointed  Executive Director of the Gullah Geechee Cultural Heritage Corridor Commission spoke about activities to expand and preserve the body of knowledge on the culture and history of the Gullah Geechee people in the Low Country and Sea Islands. She also gave a briefing on how much the landscape we see today in Charleston region was created by enslaved Africans using knowledge from their homeland to grow rice. To learn more read The Creation of the Rice Coast: A Global Exchange.

Jennie Stephens, Executive Director of the Center for Heirs Property Preservation, explained how her organization helps prevent land loss among the traditional African American land owners, who often owned family land in common. As explained on the Center’s web site”In the Lowcountry, heirs’ property  is mostly rural land owned by African Americans who either purchased or were deeded land following Emancipation. At some point in the land’s ownership, it was passed down without a written Will – or was not legally probated within the 10 years required by SC law to make it valid – so the land became heirs’ property. Heirs’ property ownership is risky because the land can be easily lost.  Any heir can force a sale of the property in the courts – OR can sell his/her percentage of ownership to another (outside of the family) who can force a sale of the entire property in the courts.

To address this loss of cultural fabric, the Center for Heirs Property Preservation aids low wealth heirs’ property owners by helping them obtain clear title and keep their family land through legal education, legal and mediation services, community empowerment and free Wills Clinics. In addition, the Center promotes the sustainable use of such land to provide increased economic benefit to historically under-served families.

For the Network for Landscape Conservation and all its partners, the Low Country of South Carolina is truly a powerful example of the interlinkage of nature and culture.  It is a lesson that effective landscape scale conservation must begin with an understanding of the region’s cultural and natural heritage as well as the living traditions of today’s descendants. And to fully value the significance of the resource, we need to place the story within a global context. In this case it is the transatlantic slave trade, the market in global commodities, and the vast international Atlantic exchange of indigenous knowledge that were the forces behind the creation of this landscape.Fortunately, an effort is underway, led by the  Charleston World Heritage Coalition, to nominate the iconic buildings and landscapes representative of the region’s Lowcountry plantation-driven culture as a UNESCO World Heritage Site. Perhaps at last the whole story will now be told.