N.Y. the Vanguard of Conservation

Looking Back on Landscape Scale Conservation

Highway Planning on a Landscape Scale: The Next Generation

What happens when a highway project long planned to improve the functionality of the overall transportation system runs up against newer approaches of planning on a landscape scale? I recently spoke to this issue at the Pennsylvania Statewide Conference on Heritage   (June  6-8, 2016 Lewisburg PA). The project in question, the  Central Susquehanna Valley Transportation Project (CSVT) ,  was under construction nearby and involved a bypass and a major new bridge crossing over the Susquehanna River. It  was planned to remedy traffic congestion on the one of the state’s major north south corridors and reroute through traffic, particularly truck traffic, out of small towns in the region.  But the project’s history was anything, but straightforward.

Planning for the project began long ago with the Final Environmental Impact Statement on the selected alignment approved in 2003. After project design was underway, it was put on hold due to lack of funding. With the passage of a new funding package in 2013, the project was reactivated. However, during that ten-year hiatus ideas about the cultural and natural values in the region had undergone a substantial shift. The project now crossed through the Susquehanna Greenway , a 500 miles state greenway. This section of the river was now designated as a National Recreational Trail by the Secretary of the Interior. And most significantly, the river corridor was incorporated into the CaptainJohn Smith Chesapeake National Historic Trail.  Originally authorized by Congress in 2006, its goals was to help the visitors to the Chesapeake Bay understand the significance of John Smith’s explorations and his impact upon the rich American Indian cultures and to appreciate and care for the life and landscape of this national treasure. The trail now extends up the many of the tributaries of the Chesapeake in Maryland, Pennsylvania and Virginia.

When long delayed construction of the CSVT  was announced, all of these new designations brought new partners to the table  seeking to conserve landscape scale cultural and natural resources in the project area – resources that had not even been envisioned in 2003. The traditional transportation planning approach had been to identify individual historic or archeological sites and the specific location of a threatened flora or faunal species and then avoid or mitigate site specific impacts. Now this whole approach was being called into question. In the case of the CSVT compromises were negotiated and in particular minimization strategies were developed to reduce impact on the Susquehanna River crossing, provide additional public access, and offer more consultation on riverfront development in the future. 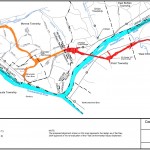 But what about the next time?  To begin with we need to recast our perspective to embrace a larger landscape approach. If the one of purposes of planning for infrastructure development such as transportation projects is to do so in a way that minimizes the impact on cultural and natural resources and maximizes the benefit to the public, then we need to stay abreast of the new frameworks by which these disciplines define themselves.

Let’s start with Natural Resources. The field has long used an ecosystem approach, which understands the importance of the interaction of organisms with their wider physical environment. A recent report from the National Academy of Sciences on large landscapes  tackled the central question of the best way to conserve the natural world noting that conservation challenges exceed the capacity of any single entity or protected habitat. Increased urbanization, extreme weather events, and fragmentation of habitat threaten both flora and fauna require that resource conservation take a broad landscape scale approach and build in connectivity for species to migrate and have room to range. So, it is not enough to avoid the spot where an endangered species was last spotted. What is needed is to predict where it is going, where can it thrive in the future.

Things are also shifting in the world of Cultural Resources. Historic preservation practioners know that that the discipline has moved from identifying individual landmarks to considering historic districts and now whole landscapes. The National Park Service has been a leader in calling for this re-examination of cultural landscape approach. Our commonwealth has also been in the forefront  develop ing a comprehensive multiple property documentation for the   Agricultural Resources of Pennsylvania, a good example of evaluating a complex living landscape. It is true that cultural resources are not going to migrate or fly away, but we need to accept that they are more dynamic and larger than our past concepts of what is significant. Cultural resources are best understood in a larger context that tells the whole story.

Finally, Recreational Resources are also being viewed through a wide angled lens.In the middle Atlantic many rivers and stream system are being developed into a statewide network of water trails. Former rail lines and canals are now the backbone of  trail systems running for hundreds of miles across the state. And of course the National Park Service manages National Scenic and Historic Trails system that crisscross the whole country. The most iconic being the Appalachian Trail from Maine to Georgia and a chunk of PA in between. The connectivity of these resources is critical.  Once a trail crossing is severed, it may be impossible or at best expensive to reconnect.

This new larger perspective presents management challenges, but there are also new regional partnerships to help coordinate these regional geographies. For example, the commonwealth of Pennsylvania is fortunate in having a whole host of such organizations. The list includes multiple National Heritage Areas and a robust state heritage areas with 12 designated areas dedicated to melding natural, cultural and  recreational objectives along with community revitalization goals. The states’ Department of Conservation and Natural Resources has launched 7 conservation landscapes to drive strategic investment and actions around sustainability, conservation, community revitalization, and recreational projects. And the agency has taken a leadership role in statewide recreational resource planning.

In addition, land trusts and other regionally focused land conservation groups have been expanding rapidly – a survey a number of years ago counted over 130 of such initiatives in New England alone as well as the newly launched “Practioner’s Network for Large Landscapes”. The National Academy of Science ‘s 2015 report identified over 20 federal programs that are utilizing a landscape approach in the Department of Interior, of course, but also in agriculture and defense.

There are some difficulties as the older paradigms about place and partnerships have expanded.  Our project management skills and our regulatory tools have yet to catch up to this new way of thinking. While there are no overnight fixes and project planners will always have to play catch up,  I do want to conclude with a couple of specific suggestions:

1) Harness the power of big data – Big data is defined as large (or extremely large) data sets that may be analyzed to reveal patterns, trends, and associations, especially relating to human behavior and interactions. The good news is that this is an area where transportation planners have been early adopters using GIS mapping in particular. But more can be done, for example,  adding the layers for rivers and trails, and other resources identified by partnership organizations. This will provide a leg up in project scoping. To get a taste of what these data bases can offer, take a look at the work of Landscope Chesapeake.  A data base that shows all the public lands and privately protected areas, trails and access points and also links in the conservation partners and state program. What a great place to begin high level 30,000-foot infrastructure planning.

2) Harness the Power of Partnerships – While much talked about, this is not easy to accomplish. And It also can seem like a burdensome add-on to what is an already crowded project planning schedule. But let’s look at the practical side,  effective public input or even better public engagement is both required as part of project planning and can make the project go more smoothly. Many of the heritage areas, land trusts, recreation organizations and conservation landscapes have identified significant resources and developed resource management plans with extensive public input.  They know what is important to the impacted region. This is great way for infrastructure planners to identify potential challenges and opportunities as well as reaching many of people who live on the ground where a project is happening.

3) Harness the power of other programs – Everyone should take a lesson from productive partnership organizations and look for the sweet spots where multiple objectives intersect. And note – this does not mean that one partner pays all – success is when projects integrate public and private dollars along with volunteer energy to deliver better communities. So think outside the box who else might have a stake in the ground? A good way to start is with an interagency approach. Who else is planning something in the region how can their work be coordinated with infrastructure development? What is in their budget and how can dollars be leveraged? High level planning that is open to new ideas is one way of accomplish these ends.

In conclusion, If I have one concern, it is that much of our planning in the past has zeroed in way too soon on way too small geography and then come up with the three least bad alternatives. Perhaps it would behoove us to spend a little more time in the stratosphere  identifying partner and programs that can help everyone be successful and accomplish their respective missions.