The Perils of Marking where History Happened

Keweenaw National Historical Park: Just where is the Park?

Michigan’s Keweenaw Peninsula is an 800,000-acre land mass that extends out from Lake Superior’s southern shore. For over 7000 years, people have come to the peninsula to extract pure copper trapped in its ancient volcanic rock formations. Between the 1840s and the 1960s, the demand for copper – combined with advances in mining technology – resulted in the removal of over 11 billion pounds of copper from the area. Michigan’s copper industry served a growing county’s needs, provided employment for thousands of immigrants, and produced amazing wealth for a number of dominant investors. Mining’s decline and demise, however, left a landscape littered with industrial, commercial, and residential resources too numerous to be cared for by the population that remained.

In 1986, several local residents began talking about the creation of a national park dedicated to the nationally significant resources of the peninsula. They learned about the creation of Lowell National Historical Park, and reasoned that if Lowell could celebrate its textile industry, then the Keweenaw Peninsula could celebrate its copper industry. Over the next six years, the residents created a national park committee, lobbied their federal legislators, worked with the National Park Service (NPS), and rallied public support. Finally, on October 27, 1992, President George H. W. Bush signed Public Law 102-543 that created Keweenaw National Historical Park.

As a creative approach in how to manage the thousands of resources spread across the peninsula, the park’s legislation established a unit of the national park system, as well as a permanent, seven-member Advisory Commission to advise and assist the NPS in the operation of the park. The legislation focused the efforts of the NPS within two small park units, and gave the Commission the authority and the operational powers to conduct activities across the entire peninsula. Although the word “partnership” never appears in the legislation, the structure and authorities of the management model made it clear that collaborating with local partners would be an essential part of preserving and interpreting the copper story. 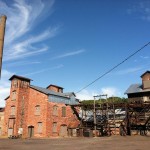 Occasionally, someone asks whether a national heritage area model would have better served the resources on the Keweenaw Peninsula. Like many heritage areas, the Keweenaw is a lived-in landscape that is not conducive to the creation of a park where the NPS owns all or most of the land within the park boundaries. In addition, numerous former industrial sites contain environmental or safety concerns that make NPS ownership difficult. Unlike many heritage areas, however, the Keweenaw Peninsula is a large region with scare economic resources and a low population density. It would be extremely difficult to generate the cash and in-kind contributions necessary to support the 50% non-federal match requirement of the heritage area model.

Instead, the partnership model laid out in the park’s legislation encompasses some of the best of both worlds. The community benefits from a stable NPS presence; a portion of the copper story will be told regardless of the health or existence of the partner organizations. The Commission can receive federal funds, raise non-federal funds, and operate on a larger landscape providing the flexibility required to maintain important partnership relationships. Finally, the participation by the Heritage Sites and other partner organizations allows for the creation of an even richer visitor experience. Although the model sometimes causes confusion for the visitors – some still ask, “Where is the park?” – the NPS and Commission are able to promote and share a wider story without having to own and operate every important historic resource. This public/private partnership engages the community, leverages federal investment, benefits the visitor, and ensures that future generations will have the opportunity to learn about the story of Michigan’s copper.